Jenaluca Herb Scissors: A Pair that Is Worth the Hype

Knives have always been the go-to option when it comes to slicing meat, fruits, and vegetables. There is really no fault in this, but one needs to master handling that knife in order to make the task easier. But then again, what if we tell you that there is a substitute for a knife? Interesting, isn’t it?

Is there any truth to that claim? Let us find out! 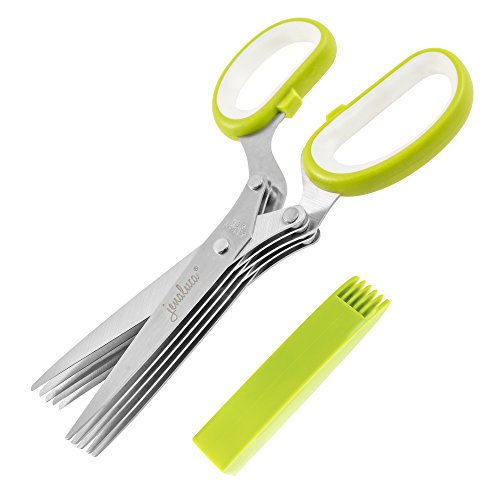 Although a lot of people claim to have been successful in cutting meat with this kitchen scissors, it is not really recommended to be used that way. Instead, it is great to be used for cutting herbs only so that they will not get bruised or torn. Definitely, this will be perfect for garnishes and herbs that need a thorough cutting.

The blades are made of stainless steel, and the handles have a TPR interior so that it will be very comfortable to use. At the same time, it will help protect the handle against rusting as well as diminish the risk of slipping.

What is so great about this pair of kitchen shears is the fact that it also comes with a cover case so that the blades are protected when it is not in use. Not only that, but the cover case also has a comb that can directly sweep off the cut herbs and transfer it to a plate.

Having that cover comb will minimize the mess of picking up such small pieces of herbs, which we all know can be pretty annoying. Then again, you might not even use the cover comb because the design of the blades was meant to be used to cut herbs directly on to your plate. No more messes, everything that will be left behind are perfectly cut herbs.

The Jenaluca Herb Scissors has five blades that claim to be better at cutting herbs compared to a knife. The design is pretty nifty as you can finely cut almost any herb that you can think of. On the other hand, it is not recommended to be used for cutting other things like meat, but pieces of paper can also work as well.

What is very interesting about it is that it can cut through whatever it is that you are cutting smoothly, and obviously, the final cuts are numerous compared to a knife. More than that, it comes with a cover case too.

However good the mechanism and the design is, it still runs to some problems such as its tendency to clog and the fact that the herbs stick to the blades. The good thing, though, is that it came equipped with the tool that can combat these problems, which is the cover case.

Let us now compare the Jenaluca Herb Scissors with the Joyoldelf Gourmet Herb Scissors. A quick look at the two scissors might confuse you because they look the same. They even have the same accent color, which is green. Not only that, but they also have the same number of blades, which is five.

More surprising is the fact that they also have the same cover case and cover comb that has the same dual purpose. So, where do they differ, really?

The Joyoldelf Gourmet Herb Scissors can actually be washed in a dishwasher. So, this points to the fact that its materials can withstand the extreme temperature inside the machine. At the same time, the herbs that were recently cut do not stick as much to the blade as compared to when you use the Jenaluca Herb Scissors.

Now, those characteristics are what is lacking from the Jenaluca Herb Scissors. In fact, as we have mentioned before, its performance can somehow be overshadowed by the fact that the herbs are hard to pick away from the blades.

More than that, the blades of the herb scissors from Joyoldelf might have a coating of some sort to prevent this from happening. Or maybe, the blade design is just better. With those in mind, which one is better?

If you ask us, the Jenaluca Herb Scissors is still the one to check out. We chose this pair of herb scissors because of its effectiveness in cutting whatever it is that you want to cut. As for the one from Joyoldelf, there will be times when the herb will be torn or get bruised. In worst cases, it will even bend. So, where is the cutting in that?

On the other hand, the one from Jenaluca can really fulfill its purpose everytime you use it. It is just unfortunate that, sometimes, the herbs get caught up in the blades. However, the good thing about this is that the solution is actually in your hands. Just use the case comb to wipe everything off, and you are good to go!