Fiskars Three-piece Kitchen Shears Set: Is it Worth it?

There are a lot of things that you can do with kitchen shears. In fact, lots of people tend to forget that they can use them instead of knives. The funny thing is, using kitchen shears is actually more efficient and significantly easier than mastering knives.

What this means is that investing in a good set of kitchen shears is a definite must-have for every household. Now, the market offers a vast selection of these products, but we found that the Fiskars Three-piece Kitchen Shears Set is something that is worth looking into. 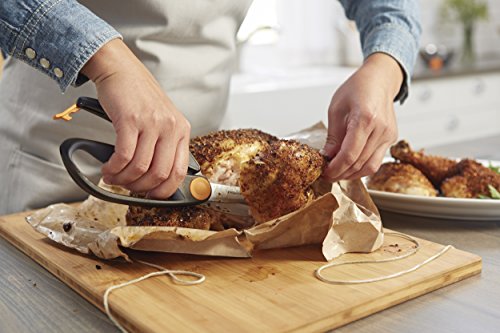 This brand claims that this set has everything that you need in a kitchen shear set. Of course, we are going to put that to the test and see how it really fares.

Today, we are going to look at its features and also list down the pros and cons of using it. At the same time, we will compare it to a similar product to see how it performs against its biggest competition.

This set comes with three kitchen shears that are meant to be used for different purposes. The shears are called the All-purpose Kitchen Shears, Heavy-duty Butcher Shears, and Fast Prep Herb Shears. Every single one of these shears is designed to make your life in the kitchen a bit easier.

Before we discuss each pair of shears in this set, let us first talk about what they all have in common, starting with the blades. The blades are made of high-quality stainless steel and are made to be extra sharp. All of their blades can be taken apart for easy cleanup, and they are also safe to be washed in the dishwasher.

As for its handles, they are ergonomically designed, and they have soft grip touch points. These touch points make for a comfortable and secure grip. As a result, it can resist any type of slipping.

Moving on to the first pair of shears, which is the All-purpose Kitchen Shears, it looks like any kitchen shears minus the serrated blade on each side of the handle. This is best to be used for general cutting needs as its design is versatile, and the blades were made to withstand intense pressure.

The next kitchen shear is the Heavy Duty Butcher Shears, and you guessed it! It is used to cut meat. For this pair, the blades are serrated so that it can easily break down the grains of meat. It also has an internal spring as well as a power notch. All of those things combined make for strong shears that can power through such thick meats and even bones.

Lastly, there is the Fast Prep Herb Shears, which is used to cut herbs for garnishes or even vegetables that need a finer cut. It is great for snipping and mincing. More than that, this one is loaded with spring so that it can work faster compared to the other two kitchen shears in this set.

The Fiskars Three-piece Kitchen Shears Set comes with three kinds of kitchen shears. The first one can be used for everyday cooking, the second one can be used on raw and cooked meat, and lastly, the third one is great for mincing and snipping herbs. Definitely, this set will provide you with shears that serve different purposes, so there is no redundancy.

At the same time, the curve of the blades, as well as the type are different because, again, they are catered to a different purpose. All of them have non-slip handles. On the good side, if you are only concerned with the cutting aspect, you will not be let down because each pair has very sharp blades.

Comparison with the Kitchen Shears by Gidli 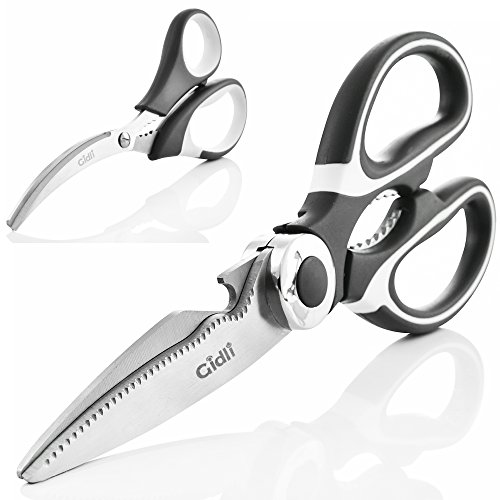 Let us now compare the Fiskars Three-piece Kitchen Shears Set with the Kitchen Shears by Gidli. The latter is not really a set, though. Instead, its main selling point is its main shears, and it only comes with a pair of seafood scissors as a bonus. But then again, it can also be treated as a set because you still get two kitchen shears.

Moving on, let us first talk about the main kitchen shears. For this one, it looks like a bulkier version of standard kitchen shears. This time, it has that curved serrated blade on each side of the handle that you can cut open shells or nuts with. The blade is made of heavy-duty stainless steel, and the handle is soft and can give you a secure grip.

The other pair of kitchen shears, which is slightly smaller and has a curved blade, can be used to cut meat. At the same time, it has a smaller, curved serrated blade on each handle, which can also be used to open shells of seafood.

After carefully looking at the features, pros, and cons, we have concluded that the Fiskars Three-piece Kitchen Shears Set is definitely worth the money. We chose this set over the Kitchen Shears by Gidli because of the variety of shears that you get with every purchase.

With the latter, there is redundancy because you can use both of the shears for the same purpose. When you buy the set from Fiskars though, you will get a lot of uses out of all the three pairs of kitchen shears.

On the downside, there are problems regarding slipping. With that said, what you can do is to make sure that the handles or your hands are not wet or oily when you use them. A simple fix, right? Now, go on and enjoy your kitchen shears set!